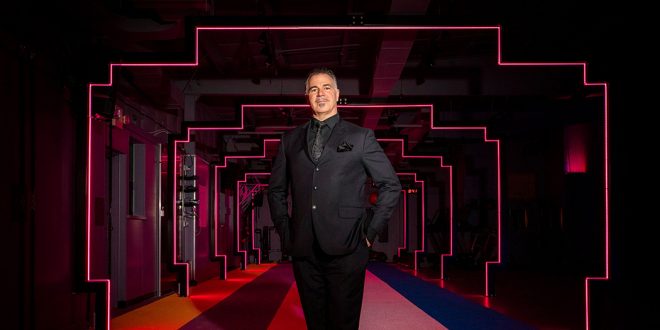 The Future Of Gym Design

If you approach the development of a new gym or the retrofitting of an existing gym with an “obsolete design-think” you might save a few hours (and a few dollars) but you’re doing yourself no favour.

Contrarily—if you embrace the killer instinct to create something entirely unseen in the fitness industry— your design effort must take an innovative and exploratory new trajectory, a 10X strategy.

Obsolete design-think is the fitness industry-go-to-narrative which consistently results in one of two outcomes (always the same two outcomes). A gym that looks like another gym. Or a gym that looks like another boutique hotel, restaurant or condominium. That’s fine (arguably) if that’s the limit which you’re willing to invest forward in time, energies, capital and outcome; however, that’s precisely a first principal problem which must overcome in hyper-competitive fitness marketplaces.

To their peril, gym owners in perpetuity, continue to disregard this reality building gym brands that blur, one-into-the-other, glutting fitness marketplaces with fitness environments that consumers have come to see as commonplace and predictable.

Following is the brand strategy that is Apple. Study and adopt in depth Apple’s marketing and design philosophies — not strategies —philosophies, prior to moving forward with the creation of your new gym brands.

Nothing undermines a unique branding platform than having none and it’s the unique branding platform that forms the nexus of which the entirety of your marketing efforts orbit. Your advertising campaigns, print, social media, in-house sales and offerings must all unite in a common theme that not only illustrates the pedigree of your fitness offerings — but additionally differentiates your brand “exponentially” beyond competitors in your marketplace (exponentially simply meaning 10X better).

In the late 1990’s global electronics manufacturers jostled for consumer market share over the MP3 player, a digital hand-held device that stored music files in digitised form. In early 2001 Apple released their brightly coloured iPod devices and by the year 2009 generated US$22 billion (AU$31.25 billion) in iPod sales. The outcome resulted in a glut of obsolete MP3 players finding new homes on eBay and in the bottom of consumer’s desk drawers.

Guy Kawasaki illustrates Apple’s approach to design, its philosophy if you will, as follows. “Apple believes that design matters” says Kawasaki, “Apple strives to jump-the-curve, to be 10X better than the competition” anything less he says “is better-sameness by Apple standards”.

If gym developers would liberate their minds of the wired-gym-blueprints they falsely believe as self-evidently true (and stop building gyms that look like gyms and boutique hotels) they would encounter immense blue-ocean opportunities which could catapult them to the forefronts of their marketplaces.

Yet they remain “gym-ified” as they are, two decades immersed, locked in better-sameness, in exhausting antiquated competition lanes, grinding on price, clawing back ROI, scanning retention figures, sparring at social media and ever-searching for the illusive lifetime-value proposition beyond their vision and reach.

Historically gym design was a low tier line-item requisite of low priority in the building a new gym brand. And historically the same blind spot, disregard for innovative “design-think” opened the flood-gates to the big-box gyms, the franchises, and now, the bespoke studios; all of the preceding embracing thoughtful design that resulted in the decimation of countless independent gyms which dismissed design as an ineffective low priority expense.

That was then, and this is now, and low-and-behold, a new Gutenberg Revolution has joined the scrum. Design savvy fitness consumers voraciously consume social media platforms scrutinising the latest and greatest in good design. Instagram, Pinterest and Tumblr, accompanied by broadcast media in the likes of HGTV, YouTube and Facebook.

Aligned with printed lifestyle editorial all of these platforms coalesce in a design hierarchy of which fitness consumers are now judge, jury and arbiters of acceptance.

In order to arrest fitness consumer attention and move fitness consumers away from your competitor’s gyms (to yours) you must abandon the design-think of building a gym that looks like another gym or boutique hotel.

10X gym design is done by embracing a conceptual design-think. You embark on a process of designing in exploratory terms. I argue the closer you get to an innovative, theatrical, Hollywoodesque gym environments, the greater the wedge you drive between the predictable gyms of your competitors and your own. I further believe that you should invest 80% of your construction budget in the design and build-out of your reception and locker rooms spaces — those spaces that will seduce prospects to buy into your brand during the pre-sale tour.

Finally, be fearless. There is no gym-glory to be won in building a facility that looks like other gyms in a fitness marketplace.

If you want to dominate a fitness marketplace you do it by giving consumers unexpected, dramatic, entertaining fitness environments that motivate them to train and exercise. Not another gym or boutique hotel.

Previous Fitness Australia: The Next Phase
Next Keepme – The New AI Tool For Smarter Member Retention