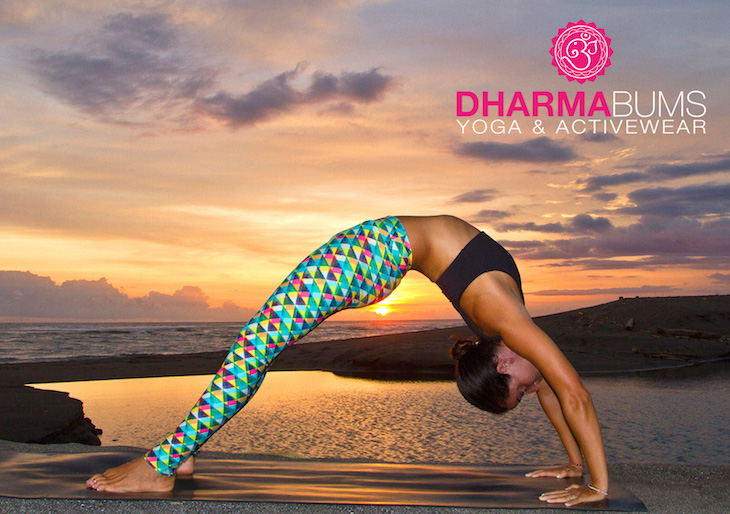 DHARMA BUMS is an Australian yoga and activewear fashion label with a difference. Based on Sydney’s Northern Beaches and established in 2013, DHARMA BUMS is an extremely ethical brand, devoted to delivering high quality and ethically produced clothing, with the belief that everyone has the right to an adventurous and rewarding life doing what they love.

DHARMA BUMS is passionate about being transparent and open in all of its endeavours. For too long the yoga and activewear clothing community has been controlled and bullied by large corporations shunning the principles of yoga by producing garments in poverty-inducing third-world factories. This is how DHARMA BUMS is different. Its clothing is designed, printed and ethically produced completely in Australia. All pieces are available to all body shapes and promotional imagery is never airbrushed.

DHARMA BUMS collections are compiled with maximum print, colour and design individuality, perfect for active individuals who want to wear something that stands them out from the crowd. Strong patterns and bright prints are the DHARMA BUMS key visual points of difference.

The DHARMA BUMS ‘fit’ has been perfected based on customer requests and caters for a range of body shapes, sizes and individual preferences. There is both a high and regular waist fit available in a variety of prints and styles.

DHARMA BUMS was founded by yoga teacher and fashion designer Debbie Lawson. After two decades in the fashion industry, Lawson is fighting back against corporations’ reliance on third-world factories after witnessing them for herself, and in turn, is creating a brand that sits apart from competitors.

“I was able to see first-hand the conditions of the factories, the long working hours and the staggeringly low salaries paid to the workers. These salaries are not enough to take any of the employees out of poverty. They are not enough to feed, clothe or provide for a family,’ she said.

“The minimum wage in a country like Bangladesh, which is where many leading retailers source from, is $68 per month. The result of such low salaries mean every family member is forced to work, often when they are still children. Of course, all companies insist they have a strong policy against child labour but this is very hard, if not impossible, to police.

“Many of the factories simply ensure the child labour is not visible to the companies who place orders with them.
Dharma Bums works closely with their manufacturers, all of whom are Australian,” says Debbie.

With DHARMA BUMS consumers now have the option to take an ethical stance whilst wearing stylish, high performance activewear garments that are produced ethically, onshore, in Australia; a world away from the 60 per cent of the clothing that is currently produced in third world factories.