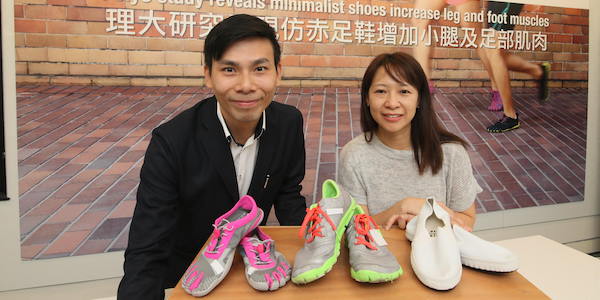 In a recent study conducted by The Hong Kong Polytechnic University (PolyU) and the Harvard Medical School, running in minimalist shoes can increase leg and foot muscle volume, indicating its potential application in rehabilitation program.

Dr Roy Cheung, Assistant Professor in PolyU’s Department of Rehabilitation Sciences, together with his team, recruited 38 runners, with a mean age of 35, from local running clubs. The participants, comprising 21 males and 17 females, have been running for six years on average with their traditional running shoes (TRS), footwear of heel-to-toe drop over 5mm, with additional cushioning pad and artificial arch support.

Among the 38 participants, 20 runners selected randomly to the experimental group underwent a six-month training program. At the beginning, each participant was given a pair of minimalist running shoes (MRS) and a self-monitoring program including transition exercise regimes such as calf strengthening exercise and balance training. The MRS used in this study featured an open-topped upper made of stretchy fabric, five separate toe compartments, zero heel-to-toe drop, no midsole cushioning or arch support, and a uniform 3mm outer sole. The other 18 runners in the control group received the same training program running with their own TRS.

All the participants were invited to undergo a magnetic resonance imaging (MRI) scanning for measuring their right leg and foot muscles before and after six-month intervention. The experimental group exhibited significantly greater leg and foot. The mean volume of the extrinsic foot muscles (EFM) attached from the leg to foot increased from around 25,100mm3/kg to around 27,000mm3/kg, an increase of 7.05 per cent, and the intrinsic foot muscles (IFM) attached from the heel to toes increased from around 4,600mm3/kg to near 5,000mm3/kg, an increase of 8.8%.

The research team explained that as MRS provides minimal cushioning and no mechanical support to the foot arches, the IFM and EFM, which function as important foot arch stabilisers, would experience greater demands for strength. The volumetric growth of EFM may also be due to higher strain and greater force generation in the posterior and medial calf muscles when running with MRS.

The study showed the transition to MRS strengthened the muscular components of the foot core system, indicating its potential application in rehabilitation program. Instead of focusing on foot orthotic device, foot core training should be emphasised in current clinical guidelines in treating injury related to weak foot muscles.