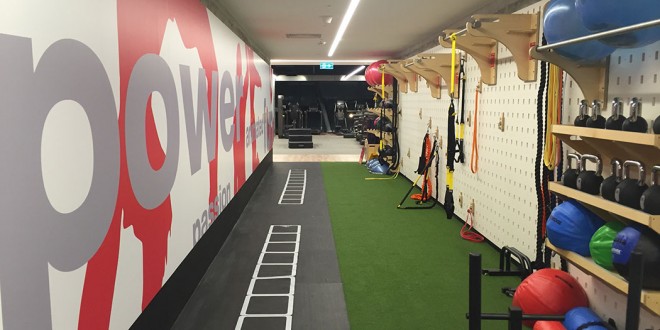 SOLID Racks is the company that has taken the idea of space-saving storage to a whole new level. Juliana Mare explains.

We’ve all come to know and love the Smith Machine; it’s a staple in most gyms and its versatility makes it one of the most popularly used pieces of equipment. However, if we’re honest, this iconic piece of equipment is a monster apparatus that takes up a decent amount of floor space. And therein lays the predicament that many fitness centres face – wanting to have ample, high-quality equipment but being restricted by limited space.

Thanks to husband and wife team Nicolle and Trevor Drake, founders of SOLID Racks, a new and highly innovative space-saving solution is sweeping across the health and wellness industries.

The SOLID INFINITY SYSTEM (SIS) is a collection of customisable wall-mounted exercise and strength conditioning tools, designed to condense a variety of standalone gym equipment onto one wall.

After installing the SIS in the rehabilitation gym of EastWest Physiotherapy in New South Wales, Practice Principal Gavin Johnston says it has exceeded expectations.

“We replaced one Smith machine for four new exercise stations – squat rack, TRX Olympic rings, tricep dips and bench press. The system runs along the entire wall… which has made our space more efficient.”

A passionate surfer, Christopher Drake – Nicolle and Trevor’s son – inspired the initial concept of SOLID Racks, when he asked his parents to design an individual storage unit for his growing collection of surfboards.

The very first storage racks launched through Quiksilver in 2007 and by 2009, SOLID Racks had made its way into the storage markets of over 30 countries around the world.

It wasn’t until 2012 that, again from their son’s suggestion, Nicolle and Trevor began the process of adapting their individual storage systems into a revolutionary new, multi-functional gym wall.

Sadly in 2013, tragedy struck the Drake family when Christopher was swept to his death by a dangerously forceful wave at North Curl Curl rock pool in New South Wales. After their son’s untimely death, Nicolle and Trevor have worked tirelessly to bring Christopher’s innovative idea to life and SIS has since won the Australian ABC New Inventors award and received numerous engineering and design award nominations.

“The wall mounted solution,” says Nicolle, “allows users to easily customise their workout space, accommodating a wide variety of training methods and is more cost effective than other systems.”

The SIS has made its mark both locally in Australia at Virgin Active Health Clubs and Anytime Fitness in New South Wales as well as branching out abroad.

The first international shipment of the SIS is heading to Reach Wellness in the United Kingdom and Managing Director Jeff Davis says this innovative product “breaks new ground in the sports and wellbeing industries.”

“We see potential for better use of space, while simultaneously expanding the suite of physical activities, which a health club might offer.”

The original floor plan of the Virgin Active club on Collins Street in Melbourne included a standard 12m corridor. Being easily customisable, installing the SIS meant that this corridor could instead be transformed into a multi-functional training zone.

“The wall, storage racks and training equipment all look superb and open up floor space with no cumbersome and ugly uprights.”

The results speak for themselves with the SIS being one of the most popular areas of the Virgin Active gym after just three months of operation.

Offering the freedom and flexibility to organise any space, the SIS isn’t just limited to the inside of a gym. From community centres, urban landscaping, schools and rehabilitation centres, SOLID Racks have created a product that can be easily and cost-effectively adapted to any number of spaces.

Relationships Manager of Fitness Australia, Daniel Ferguson-Hill says the potential of such a versatile system, is endless.

“Its capacity to allow for creativity and imagination may very well change the way we look at space in fitness facilities in Australia.”

With interchangeable dip racks, weightlifting racks, deadlift stations, TRX hooks, dumbbell storage and so much more, it’s no surprise that the SIS is giving the fitness and health industries a well- organised and highly efficient makeover.