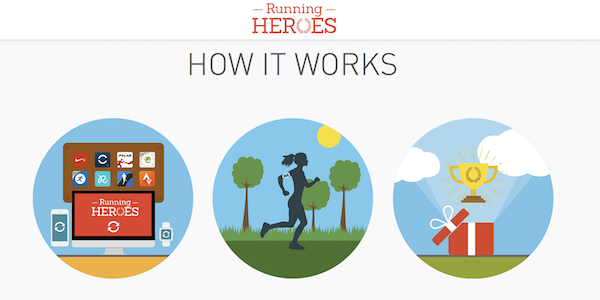 Innovative encouragement and exciting rewards by Running Heroes are bringing unparalleled motivation to hundreds of thousands of people to getting in shape and staying healthy.

The sedentary bad habits of modern societies may be seeing their final days. Running Heroes, the innovative online community that rewards people who actually make and practice the decision of running for their lives, is already keeping over 230,000 people in France, the UK and Australia running for highly prized rewards as well.

“And the number keeps increasing”, says founder Boris Pourreau, who also stated that the community “is only now making its first steps in the UK and Australia, and already seeing exciting results”.

Founded in France in 2014, the French startup was created by sports enthusiasts Boris Pourreau and Jean-Charles Touzalin with the vision of encouraging and rewarding people on their journey to a healthier lifestyle. It was funded through equity crowdfunding and by reputed French private investors, “in a challenging but very stimulating experience”, comments Pourreau, “ that forced us to run even more, in all circumstances that one can possibly imagine, so to fine-tune it and make sure it would work as perfectly as it is now performing”.

The model that Running Heroes offers is singular. Through a partnership with big brands, such as adidas, Reebok, Uber, Nike and Holiday Inn, among so many other powerful international brands, people who run with Running Heroes are rewarded for the efforts they put in their exercise.

“What we offer people is a mix of meritocracy, healthy habits and a powerful and free tool that makes their lives better”, observed Alex Auroux, Running Heroes’ AU Country Manager. “People register on www.runningheroes.com and link their preferred running app or GPS watch to the website. As they go on their running sessions, our members automatically earn points that they can subsequently redeem by choosing the exciting and exclusive offers that our partners have for them. The more people run, the healthier they’ll get and the more rewards they’ll win”.

“We also inspire the community by sharing other’s people stories, from the community to the community. We count wonderful runners in the community who have successfully lost weight, managed a medical condition through running and they now share their stories to inspire others.” says Alex.

Running is considered one of the best and simplest forms of exercise – and it’s entirely free. Statistics have shown that people who run frequently feel happier and more stress-free. They have an increased lung capacity, tend to be less exposed to high blood pressure, have stronger immune systems, higher bone density and successfully overcome weight-problems. Besides running has become increasingly popular and recognised as a powerful way to fight health issues like overweight problems, diabetes and mental health and depression.

“People who struggle with weight issues find Running Heroes particularly helpful, since they feel that they are rewarded not only by losing weight, gaining health and feeling better about themselves, but they are also part of a very large active and engaged online international community that goes out and runs for a better life. Plus, the rewards that people collect just by running with us, adds motivation and keep people active. Indeed, we are already seeing that in our community, and we are sure we will go on seeing this positive effect in more and more people”, Boris Pourreau said.

The Running Heroes average community member is 35 years old and 43 per cent of the community is composed of women.

Through Running Heroes, the entire community already ran a distance equal to a four-time-run around the globe, with an average 9,11km distance being ran per session, and an average 2 hours and 12 minutes of time spent running each week per runner.

To find out more, head online.

Previous The Fitness Generation Launches The New Personal Power Plate®
Next Fossil Group, Inc. To Launch More Than 100 Wearables In 2016