Latest News
Home / In the news! / How To Stop Snoring With New Laser Treatment 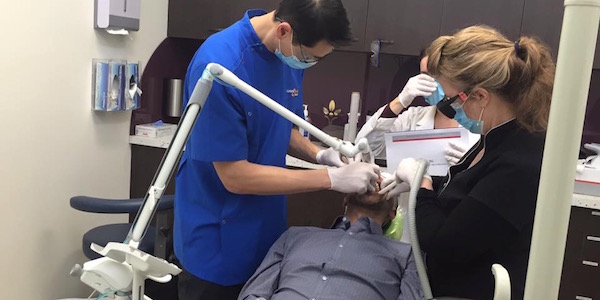 How To Stop Snoring With New Laser Treatment

First dentist in NSW to use new laser snoring treatment, means a visit to the dentist can now put a stop to your snoring.

Dr Jason Pang from Cosmic Smile Laser Dental in Neutral Bay is the first dentist in NSW trained to perform a revolutionary new laser dental technique that can stop snoring and lessen the effects of sleep apnoea.

Called NightLase, the laser treatment is performed in the dental chair with no downtime and no side effects. Used effectively and safely in Europe for many years, it has a high success rate in producing a positive change in sleep patterns.

Snoring is a common problem affecting around 40 per cent of men and 30 per cent of women, according to Australia’s Sleep Health Foundation. Apart from the negative effect it has on relationships, snoring can lead to fatigue, irritability and increased health problems.

“I’m actually sleeping through the night now and waking up full of energy”, says Pierre. “My wife is over the moon as she is getting her first good night’s sleep in years”, he says.

The treatment works by using a laser light to tighten the bulky tissue at the roof of the mouth and near the tonsils, allowing the air to flow more freely, which in turn decreases snoring and sleep apnoea problems.

“NightLase brings about long term improvements in snoring without the need to wear a mouthpiece or any other device. There is no pain and no anaesthesia required”, says Dr Pang. “My patients simply walk-in, have the procedure and walk-out again, returning to their normal routine straight away”, he says.

Although benefits can be felt after the first treatment, the full effect is said to occur after the third treatment, where studies report a definite improvement to snoring and sleep apnoea.