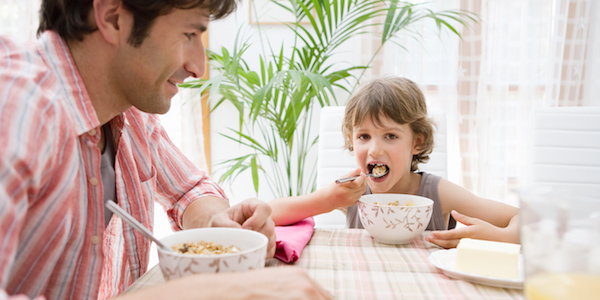 A new analysis of Australian Bureau of Statistics (ABS) data has revealed that regardless of sugars content or cereal type, eating breakfast cereal is linked with lower BMI, slimmer waists and better nutrition.

A brimming bowl of nutrients

While brekkie cereal eaters (be it ready-to-eat, muesli, or oats) ate the same number of kilojoules in a day, they had far better nutrition than other breakfast eaters. Adults got 28% more iron, 22% more calcium, 19% more fibre and 13% more magnesium, with 13% less sodium and 7% less saturated fat.

Those who started the day with a bowl of breakfast cereal had 1cm slimmer waists than those who ate other breakfasts and 2cm slimmer than those who skipped breakfast all together. Brekkie cereal eaters were also more likely to have a healthy weight and meet nutrient targets.

Good for the gut

Did you know the total sugars from breakfast cereals make up less than 2% of the daily kilojoules of breakfast cereal eaters? So when you weigh this up with all the extra fibre, vitamins and minerals you get, brekkie cereal is an easy choice.

The breakfast cereal aisle has more than 420 options for Australians – more than half of these have the Health Star Rating and the majority (82%) are rated 4 to 5 stars.

Below is a summary of key research findings from a new analysis of the Australian Bureau of Statistics (ABS) Australian Health Survey data[1] and the Grains & Legumes Nutrition Council’s 2016 breakfast cereals category audit[2].

• Breakfast cereal consumers had five times the milk intake at breakfast than people who ate other breakfasts (155mL vs 31mL).

• The most common foods eaten by people who did not eat breakfast cereals (47% of adults and 46% of children) were bread, milk, sugar/honey/syrups, coffee/tea and margarine.

They also had 13% lower sodium intakes

• Adults and children who ate breakfast cereal had slightly higher daily total sugars intakes (9% for adults and 7% for children) over the day, including naturally occurring sugars (e.g. from milk and fruit).

• The total sugars in breakfast cereals accounted for less than two percent of total energy (kilojoules) in the diets of Australians who ate it.

Consistent benefits regardless of type of breakfast cereal

The category has a strong nutritional offering. There are now more than 420 breakfast cereals for Australians to choose from.

• 60% are classified as high in whole grains