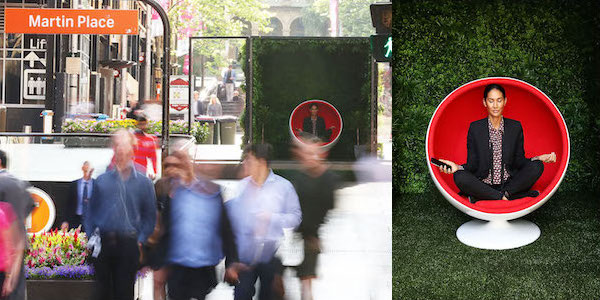 We live in a fast-paced, connected world where we’re always switched on, and often don’t have a moment to take time out for ourselves. So to help restore the balance, Virgin Mobile has teamed up with not-for-profit organisation, Smiling Mind, to empower everyday Aussies to make a positive change to their lives, through mindfulness meditation.

To announce the partnership, Virgin Mobile has joined forces with businesswoman, mother and meditator, Lindy Klim.

“We’ve all experienced it; that moment when we realise our minds can’t handle or process anything more, yet we continue on with little consideration for our mental wellbeing,” says Lindy.

New research from Virgin Mobile reveals 71%[1] of people surveyed have some form of digital technology within easy reach throughout the majority of their day (i.e. 80% of the time or more) and three quarters (75%[1]) feel that it has increased the pace of life to stressful levels. It’s no wonder then, that in today’s fast-paced world three quarters (73%[1]) of people surveyed believe we now live in the most stressful era in human history.

With stress comes mental fatigue, which is also becoming such an issue for workers that they lose four days[1] per year in an effort to reduce the problem – equating to over 56 million days1 of sick leave per annum, and costing workplaces and the economy $17.7 billion dollars1.

With this in mind, Virgin Mobile’s new partnership encourages more people to take time out to practice mindfulness. Co-developed with psychologists and health professionals, Smiling Mind exists to help build mental health and wellbeing through web and mobile app-based meditations. Some of the many benefits include a reduction in anxiety and stress, increased productivity, enhanced awareness and empathy, and improved sleep.

“Meditating doesn’t have to be time consuming – it’s amazing that through just 10 minutes of regular practice, we can improve our productivity and get a better night sleep,” added Lindy. “The next time you’re on the train or bus to work, or in-between meetings, why not swap your playlist or coffee break for a meditation. It will make a huge difference to your life.”

As part of the partnership launch, Virgin Mobile has created and positioned a number of meditation smart chairs in oasis-style environments across the country for the public to experience Smiling Mind’s meditations. They aim to illustrate that no matter where you are, even if you’re in the middle of your working day, it’s feasible to take 10 minutes to yourself to practice a little mindfulness.

David Scribner, CEO of Virgin Mobile Australia, said “As a Virgin business, it’s important we take responsibility for the products we sell, by reminding our customers of the benefits of taking a little time out for yourself each day.

“By partnering with Smiling Mind and their meditation app, we want to deliver a more genuine mobile phone experience for our customers that helps restore balance to their lives. Encouraging them to make mindfulness part of their daily mobile behaviour can do just that.”

Addie Wootten, CEO of Smiling Mind, said, “We’re incredibly proud to be partnering with Virgin Mobile. Smiling Mind has already reached over 1 million people worldwide and we hope this will inspire more Aussies to get involved with mindfulness and experience the benefits that it brings.”

The Smiling Mind app can be downloaded for free from both the Apple App Store and Google Play.

The research was commissioned by Virgin Mobile and conducted by Lonergan Research in accordance with the ISO 20252 standard. Lonergan Research surveyed 1,039 Australians aged 18+. Surveys were distributed throughout Australia including both capital city and non-capital city areas. The survey was conducted online amongst members of a permission-based panel, between 30 September and 4 October 2016. After interviewing, data was weighted to the latest population estimates sourced from the Australian Bureau of Statistics.

From the moment Sir Richard Branson drove a tank across the Sydney Harbour Bridge to launch Virgin Mobile in 2000, we’ve been driven by our brand purpose of changing the game for good. In a world where most Australians feel powerless against their mobile provider, Virgin Mobile is here to restore the power balance. After all, we’re famous for doing things a little differently, and for a very good reason – our customers.

First of all, we deliver a fairer and more genuine experience by delivering above and beyond on the basics, with award-winning customer service and irresistible prices on the latest handsets, backed by the Optus 4G Plus network. We also offer loads of red hot extras, from data-free music-streaming on eligible Postpaid mobile plans, to the Australian-first innovation of Data Rollover which is still exclusive to Virgin Mobile on new Postpaid mobile plans.

But it doesn’t stop there. When you join us, you’re joining the Virgin family too, so if you’re on a Postpaid plan you can earn Velocity Points just for paying your bill and get access to discounts and deals across other Virgin brands. You’ll also feel part of something bigger, as we invite you to help make the world fairer and brighter through our partnerships with OzHarvest, R U OK?, and Oasis. And we do all of this with a side serve of unmistakeable Virgin swagger. Why? Because we don’t just play the game, we change it for good.