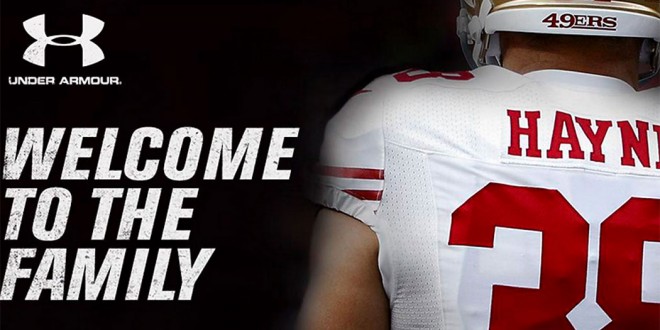 “This partnership was a natural fit for me – Under Armour is a powerful global brand with a deep history in American football. I have used Under Armour gear throughout my NFL training and it gives me a definite advantage. I look forward to representing Under Armour in the next chapter of my journey.” said Hayne.

Born in the suburbs of Sydney, Hayne excelled early in the sport of rugby with his quick speed and unpredictable lateral movement on the field, playing professionally for the Parramatta Eels and representing both Fiji and Australia in two World Cup games. He earned honors at the State and International levels throughout his rugby league career and surprised fans when he decided to leave the sport in 2014 for a run in the National Football League.

“Jarryd epitomises everything we stand for as a brand – hard work, will and determination” said Will Phillips, Managing Director, Under Armour Australia. “He is writing his own story and we are excited to watch it unfold. Under Armour is proud to support him on this journey.”

True to the Under Armour mission, the Australian rugby star-turned NFL player earned his spot on the roster through extensive training and determination, making him the player to watch this pre-season with the league’s highest average yards per carry (7 yards) and a total of 163-yards on punt returns. His rugby-style of play continues to generate attention and admiration fromsports fans across the world, including his home country of Australia.

Hayne will use Under Armour apparel, footwear, equipment and Connected Fitness digital tools as he trains and competes with the 49ers.