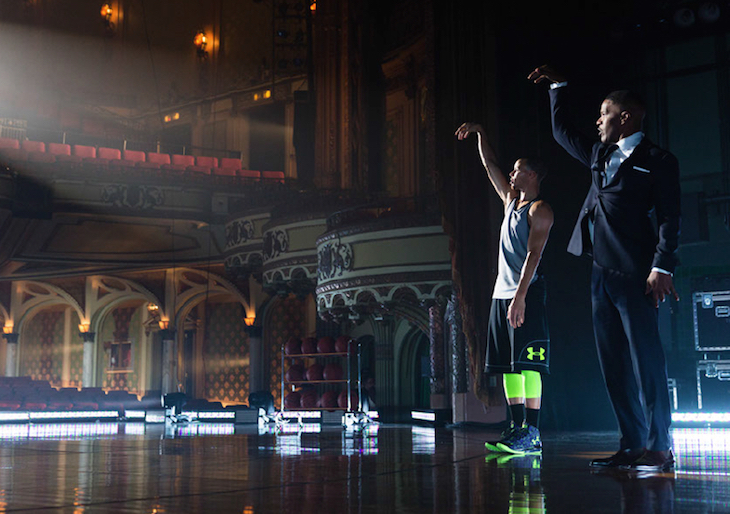 The Yearlong Campaign Launches During NBA All-Star Weekend and Features a Series of Short Films Celebrating the Spirit of the Underdog.

Oscar-winning actor Jamie Foxx and NBA All-Star Stephen Curry joined Under Armour Founder and CEO Kevin Plank at an event in New York City to launch the brand’s biggest ever global brand campaign, The Book of Will. Foxx is the star and Creative Director of the new short films that are expanding the brand’s I WILL campaign dedicated to the underdogs whose journey is defined by a relentless drive to succeed. The first film from the campaign, which debuted at the event, tells the story of Curry’s journey and is entitled “Volume One: Shakespeare Got it All Wrong.” It will air on February 16 during the 2015 NBA All-Star Game telecast on ESPN in Australia.

“We’ve had a relationship with Jamie since 1998 when he was filming the movie ‘Any Given Sunday’ and we knew he was the right creative partner to help bring Stephen’s journey and the underdog message to life,” said Plank. “He understands what it means when athletes will themselves to make something happen, and – like creating a legacy in Hollywood or taking the NBA by storm — a lot of times that means rewriting the book and creating your own path.”

Acclaimed film director Peter Berg, directs each spot in the campaign. The new film is available to watch now at youtube.com/underarmour.

“Stephen Curry is the hottest player in the NBA right now, and this film tells the story of his tough journey to get there,” said Foxx. “With the season he’s having, everybody is acting as if they believed in his talent from the start, but he had to fight his way up from day one, through high school, to putting a small college on the map, to dominating in the league.”

“Shakespeare Got it All Wrong” depicts Stephen’s path from being the son of an NBA star, to an overlooked high school basketball player, to becoming the game’s new creative genius and most “unguardable” playmaker. After being virtually unknown to scouts and pundits just a few years earlier, the film anoints him as “The Patron Saint of Underdogs.”

Detailing Curry’s rise, and the response he has received causing mob scenes at Under Armour stores around the world, from New York to Shanghai, the content is comprised of real moments in his life going back to his childhood. Now in his fifth professional season, Curry has established himself as one of the game’s most electrifying players. He is redefining the point guard position with a combination of floor vision and shooting that sets him apart from anyone who has ever stepped on a basketball court. The leading vote getter amongst all players, he is starting in his second straight NBA All-Star game this Sunday in New York City.

“I appreciate the journey I am on and what I’ve gone through to get where I am today,” said Curry. “I’m enjoying the success, but I still feel I have room to grow to reach my full potential. The process is about getting better everyday and never losing the hunger to reach all my individual and team goals.”

Featured in the commercial is the “Dark Matter” Curry One – the colorway of his signature shoe that he will wear during the NBA All-Star game. Available at UA.com starting on February 13 for $119.99, the new shoe features Charged Cushioning™ and Anafoam technology. Charged Cushioning absorbs impact and converts it into a responsive burst, offering explosiveness in every step and change of direction. Anafoam molds together EVA foam and mesh to provide basketball players of all levels with anatomical support at key pressure points.

The second film in the series, “Volume Two: Aristotle Got it All Wrong,” also debuted at the event. It airs on broadcast starting February 17 on ESPN network, and is available to watch now online.

Starring Foxx alongside US track and field athletes Manteo Mitchell and Natasha Hastings, the film chronicles the self-determination and inner drive it takes to be the fastest person on the track. In this take, its Aristotle’s famous: “You are what you repeatedly do,” quote that is rewritten for Under Armour athletes to: “You are what you repeatedly do, when things get hard.” For Mitchell, his reaction to the challenge is detailed by his resolve during the 2012 Olympics when he broke his leg while running the 4×400 relay and continued running another 200 yards to pass off the baton, giving his team the chance to eventually win the silver medal.

UA SpeedForm Gemini brings precision fit and feel to a shoe made for long distance running. It features a seamless heel cup and lightweight, breathable upper, which minimizes distractions and allows for a more locked in, personalised fit. UA SpeedForm Gemini is available February 23 for AUD $179.99 at Rebel Sport.