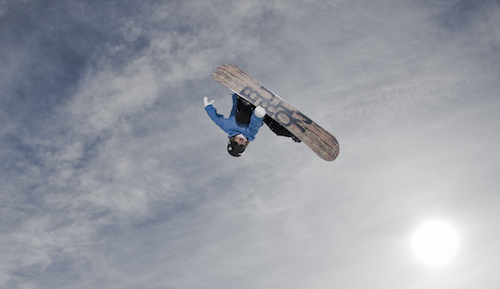 The Fall and Rise of Snowboarder, Kevin Pearce

Unlike many professional extreme sports people, Kevin Pearce has lived to tell his tale. The former US elite snowboarder and 2010 Winter Olympic medal hopeful survived a near fatal accident that changed his life forever. During a training session on New Years Eve in 2009, Kevin landed on his head while practicing a new trick in the half-pipe at Park City, Utah. He was airlifted to hospital, spending a month in critical care and then a brain trauma rehabilitation centre for a further five months.

Recently in Australia for a charity screening of his documentary, The Crash Reel, which tells the story of his life before the accident, that fateful day and his road to recovery, Kevin says he’s grateful to be doing so well. ‘It took a long time for me to come to terms with the fact that I couldn’t continue to live the lifestyle that I had been living,’ explains Kevin. ‘I have made this amazing recovery, but my brain is still healing, and I’m still having a huge amount of issues with my eyes and I’m still dealing with memory issues.‘

Dyslexic, Kevin explains that he was a failure at school and his greatest pleasure was when he was up on the mountain, snowboarding. ‘I would succeed and I felt that I was doing something. I had so much fun and was so good at it – snowboarding gave me that feeling and this was so special to me.’

Kevin says the footage in the film came from 232 different sources, including footage of memorable moments with his family. ‘The most powerful thing was watching what my family, my friends and the snowboard community had done for me,’ he says. And certainly, seeing the extraordinary Pearce family’s love and devotion to Kevin and his other three siblings is touching. David, Kevin’s brother, who has Down syndrome, is admittedly the star of the show and to listen to his admission and how he struggles with his own autism is heart breaking.

Three and half years in recovery, Kevin admits he looks at things a little differently now although he won’t be changing his ethos of living life to the limit. ‘This has really helped me see how fragile this life is that we’re living and how quickly it can be gone and how quickly we can lose something so important,’ he says.

It becomes quite clear that Kevin has finally accepted that his career as a champion snowboarder is over. He’s now happy sitting on the sidelines, commentating at the X Games and promoting his new campaign Love Your Brain, which he says is ‘taking something positive out of a really negative situation.’ The foundation runs several initiatives and the profits go to help families and kids that are struggling with brain injuries or Down syndrome.

And how has he done it? ‘I’ve been dedicated and driven and I’ve done everything to the limit and the best I can. A lot of things have changed but my drive and my competitiveness is still the exact same as before I bonked my head – it’s just who I am and how I have been raised.’

The Crash Reel’ is available on DVD in Australia, as of 7 August. For more information visit www.thecrashreel.com