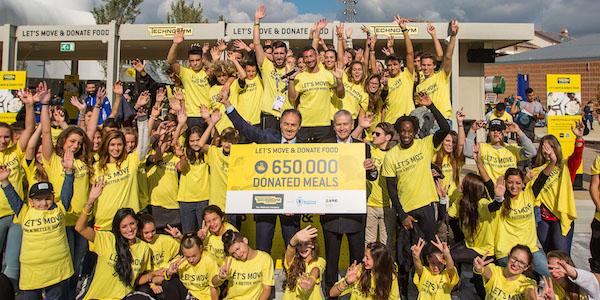 Among the events organised to celebrate the World Food Day is the social campaign “Let’s Move & Donate Food”, launched by Technogym at the 2015 Milan Expo to convert physical movement into meals for children in countries affected by malnutrition, with the support of the World Food Program.

The World Food Day is the occasion to celebrate the outstanding success, beyond all expectations, of the social campaign “Let’s Move & Donate Food” – which reached the target of 650.000 meals to be donated by Technogym to children in some of the poorest world Countries, in conjunction with the UN World Food Program.

In line with EXPO’s leading theme “Feeding the planet, Energy for life”, the campaign made it possible for visitors, throughout the duration of the event, to exercise both at Technogym Points on Technogym equipment, or by walking on the Expo grounds, and then convert physical movement into meals for children in need.

The initiative launched at Expo involved gyms and fitness centres all over the world where – thanks to the special Technogym app – fitness enthusiasts were able to donate their movement and contribute to the cause.

During the Milan EXPO opening months, close to 50,000 persons participated in this social campaign, reaching a total of over 650 million MOVEs (Technogym’s unit of measure for physical exercise) – which corresponds to approximately 300 million burned calories and as many as 41,000 lost kilograms.

Physical exercise thus acquires social value and becomes ‘healthy’ not just for those who exercise. For many years, Technogym has been active promoting wellness as a social opportunity for everyone: Governments, Companies and the general Public. “Let’s Move and donate food” is a hands-on initiative aimed at leveraging technology for a shared social cause and build together a hunger-free world, starting from the younger generations (Technogym Ecosystem is the first platform world-wide based on equipment connected to a cloud platform for physical exercise management).

President and Founder of Technogym, Nerio Alessandri remarked: “We are witnesses to a paradox on a global scale. On one hand nearly 2 billion people are either obese or overweight and on the other hand there are 800 million malnourished citizens. The aim of our campaign is to bring about a real change by promoting physical activity and fighting malnutrition at one and the same time.”

Ambassador Giovanni Castellaneta, President of WFP Italy, said: “The results obtained thanks to the partnership with Technogym demonstrate how one can help children and their families in the world’s poorest countries. In the fight against hunger, the WFP school meals represent a sound investment to support the future of coming generations. We are grateful to Technogym for backing this initiative so strongly and we hope to work together again in support of other WFP projects.”

Through its collaboration with the WFP, Technogym is taking part in the global “Zero Hunger Challenge” initiative launched by UN Secretary General Ban Ki-Moon.

Find out more from Technogym Australia or click here to discover special deals and offers.