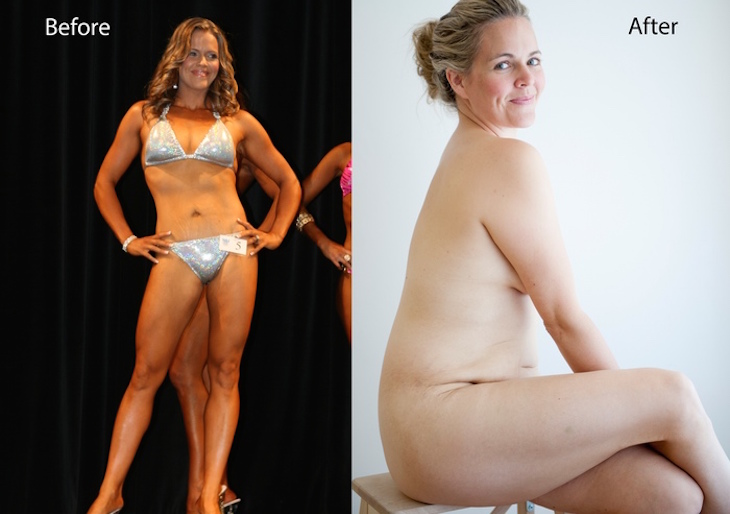 With over 60,000 followers on Facebook, 3.6 million clicks on her controversial “before and after” image and over 7 million views of her Kickstarter video campaign (see video below) that raised over $300,000 within 55 days (and incidentally is Australia’s most successful crowd-funded documentary to date) – this Adelaide mother of three is changing the world one “body loather” at a time – this is Taryn Brumfitt’s story.

In 2012, While contemplating her impending plastic surgery in attaining the “perfect body”, Taryn Brumfitt had an epiphany:

“If I go through with this, what am I saying to my daughter about body image? How will I teach her to love her body? How am I going to encourage her to accept and love her body, when I am standing in front of her with a surgically enhanced body? What type of hypocrite or mother would I be?”

With the decision to cancel her surgery firmly in place, Brumfitt was still left with the daunting awareness that she was stuck in a body that she detested. She was at rock bottom, hating her body more than ever.

Then a thought occurred, “What if I could live happily with my body?” – this would be the question that propelled Brumfitt to embark on a world-changing journey.

Now, for the first time, sharing her life story – from crying in despair on the bathroom floor to stepping out in stripper heels onto a brightly lit bodybuilding stage – we follow Brumfitt on her journey from body loather to body lover.

Providing an important message for mothers, daughters, fathers and sons, Brumfitt’s tell all book, Embrace, raises important questions about the pressures society puts on women to conform to a certain body shape, and asks what we can do to prevent this having a negative effect on the next generation:

“We live in a beauty-obsessed society, and we’ve been preyed upon and reprogrammed by the diet and beauty industry to want to be something other than what we are.” – Taryn Brumfitt

Embrace offers a warm, frank and funny account, of Brumfitt’s journey from self-loathing, to being a freethinking exponent on the value and power of a positive body image.

Along with her first book, Brumfitt is set to produce a documentary that sees this message transforming the world. Receiving international attention, Brumfitt’s Kickstarter campaign to raise $200,000 in 55 days was backed with the support from some of Hollywood’s biggest stars including Ashton Kutcher, Zooey Deschanel, Ricki Lake, Perez Hilton, Amanda de Cadenet and Rosie O’Donnell resulting in her reaching over $330, 000 to date. Brumfitt has found herself at the forefront of the media, appearing on The Today Show, Sunrise, Studio 10, as well as Good Morning America and the U.K’s Huffington Post. Additionally, she has been interviewed by media from over 50 countries around the globe including Germany, Kuwait, Canada, New Zealand, Peru, Brazil and Finland to name a few!

You can also read an exclusive interview with Taryn in the March edition of OH! Magazine, the publication designed specifically for health clubs to use as a communications, retention, reactivation and sales tool.