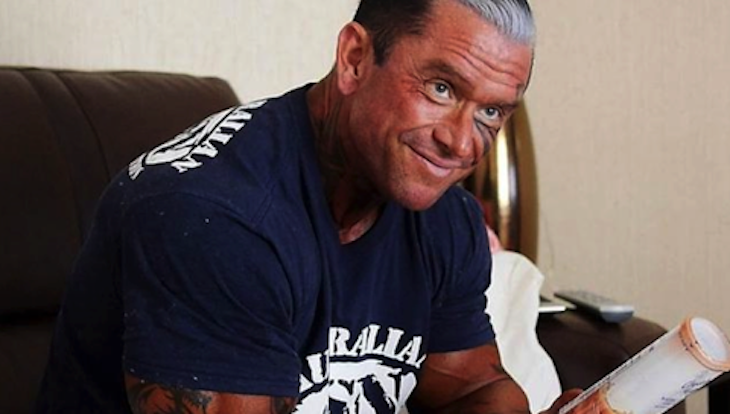 Steroids vs Alcohol. What’s to blame?

The country’s leading bodybuilder has admitted to 20 years of steroid abuse, saying “roid rage” is a myth and the real problem is alcohol.

Mr Universe, who claims steroids are rife among professional and amateur athletes including NRL players, also believes that sending users to jail for up to 25 years is “f… ing ridiculous”. Priest, who Arnold Schwarzenegger once described as one of his most feared opponents, confesses to using steroids “on and off for 20 years”, but says he is not alone. “I’ve seen rugby league players pick stuff up from people. I’ve seen it in soccer, cycling, swimming, basketball and baseball,” Priest said. “Go to an emergency room any given weekend and see how many people are in there from alcohol abuse and fighting, then show me the beds where people are in there for steroid overdose or steroid use.”

“In 60 per cent of gyms I walk into there are young kids on steroids,” he said. “I don’t see any roid rage from them. I see a few idiots, but I see idiots whether they take steroids or drink alcohol. If you’re an idiot you’re an idiot, no matter what you’re taking.”

Priest, who won the Mr Universe title last year, slammed suggestions from Premier Barry O’Farrell that steroid use had contributed to violence in Kings Cross. “Barry O’Farrell needs to talk to people in the know like myself, who’ve been using them for years,” he said.

“I’ve never been in a fight since high school, never had a speeding ticket. Roid rage is a myth. I see more idiots doing shit drunk than on steroids. If steroids make you crazy and fight, then why aren’t gyms and all other pro sporting places full of fights 24/7?”

When the state government announced its response to ongoing problems in Kings Cross, the harshest penalties were dealt out to steroid users. Jail terms for steroid possession or supply were increased from two years to 25 years. This was despite the Government’s focus on alcohol related violence. “I find it strange that if I’m a professional athlete, an adult using a steroid for my given sport and had two bottles in the house for an injection once a week, I could get 25 years for doing that. I’m not hurting anyone,” Priest said.

But Mr O’Farrell refused to backdown on his hardline approach. “Mr Universe is on another planet,” he said. “I make no apologies for getting tough on illegal supply and possession of steroids as part of our crackdown on drug and alcohol-fuelled violence.”

The state’s top criminologist Dr Don Weatherburn, who insists links between anabolic steroids and violence, and alcohol and violence are well established. “If you’re full of steroids and aggro and drunk, you lose your self control — it’s a toxic brew,” Dr Weatherburn said.

Priest claims there is no official link between steroids and violence, but admits obsessive behaviour could be a cause for meltdowns. “I’ve witnessed guys on strict diets get mad when they can’t eat food, but this whole roid rage thing is a myth,” he said.

Dayne Hudson, a natural bodybuilder and creator of fitnflexed.com, said there’s no doubt steroid use is on the rise. “I’ve never used steroids in my life, but I’ve been around gyms for long enough to know that what was once the domain of a few professional athletes is now becoming less taboo in the general public,” he said.

Priest, who grew up in Newcastle and started competing in bodybuilding at 13, believes the biggest cause of today’s violence is a lack of discipline in schools and at home. “I think it comes down to how kids are raised these days,” he said. “Back when I was growing up, I used to get the cane. These days teachers can’t do that, and parents can’t really control their kids, or the kids will tell them where to go. I couldn’t believe it when I moved back from America and saw kids fighting with police who are trying to do a great job. If that happened in America they’d be shot straight away.”

The link between anabolic steroid use and aggression was made two decades ago when several defendants in murder trails used the “dumbbell ­defence” claiming diminished responsibility due to roid rage.

The last comprehensive study in Australia into the link was conducted by The Bureau of Crime Statistics and ­Research in 1997. After reviewing available evidence researchers found “that chronic high doses of anabolic steroids are more likely to increase the risk of aggressive and/or violent behaviour than to leave it unaffected.”

In 2008, the American Journal of Public Health published a study that looked at 20,000 adolescents from the National Longitudinal Study of Adolescent Health and anabolic-androgenic steroid use and involvement in violent acts. Lead researcher Dr Kevin Beaver concluded that “results suggest that the use of anabolic-androgenic steroids is ­related to heightened levels of violent behaviours”. “Chronic high doses of anabolic steroids are more likely to increase the risk of aggressive and/or violent behaviour than to leave it unaffected.”

Anabolic steroids are artificially manufactured forms of testosterone given at up to 100 times the natural levels. And while the dramatic physical changes are well documented, the behavioural and emotional effects of steroid use are under-researched. In 2007, a Cleveland Clinic Journal of Medicine review posed the question if steroid users were psychologically dysfunctional to begin with. Other researchers found weightlifters and body builders who used steroids showed higher scores for pathological narcissism and lower scores for empathy. Dr Mathew Dunn from the Public Health Department of Deakin University is conducting interviews with steroid users to ascertain the link, if any.

“When we interview people who use steroids, some say they are more aggressive and violent with a lower trigger point they are more testy, but that is not everyone,” Dr Dunn said.

Co-researcher Professor Peter Miller said users were often stronger and therefore could do more damage. “Even if someone on steroids isn’t raging, when they punch someone they do so much more damage,” he said.

Article by BEN FORDHAM for The Sunday Telegraph.

2014-03-04
admin
Share
Previous Are you ready for FitX 2014?
Next ﻿IntegraPay Partners With PT.Transact To Change The Way Personal Trainers Do Business