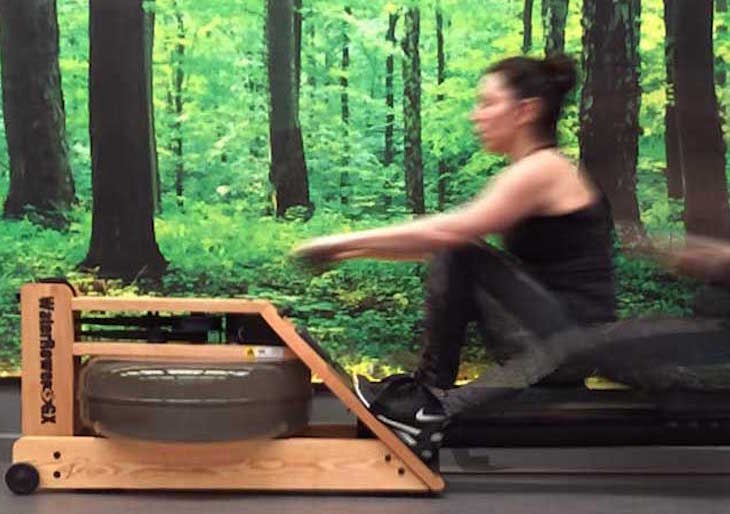 The rowing machine long gathering dust in the corner of gyms has been given a new lease of life with the introduction of high intensity interval group rowing classes. The days of sliding back and forwards on a machine on your own watching the time pass slowly by are now over.

In New York it is being hailed as the new Spinning and is the “weapon du jour” for Hollywood hardbodies as Details magazine describes them Jason Stathan and Zac Efron.

The rowers that have changed the game are the WaterRower as seen in TV show House of Cards. Now these beautifully crafted machines have arrived at SpinStar in Prahran. The studio has launched its “Row & Ride” classes using the classic WaterRowers designed and patented it in 1988 by John Duke, a former member of the US National Rowing Team.

The rowers stand out for their furniture-like design, with its timber frame sourced from the sustainable Appalachian Forests and uses a specially formed flywheel that simulates a paddle as it swooshes through water.

You may have seen the WaterRower in the popular Netflix hit House of Cards where it is the exercise of choice for president Frank Underwood (Kevin Spacey) and in the final episode by his wife Claire (Robin Wright).

The idea behind bringing rowers and spin together in a single class came from Pam Meyerowitz, founder of SpinStar, because she wanted to offer her clients an effective upper body in addition to lower body workout.

Meyerowitz has always strongly believed in balance in working out and the growing popularity of group rowing classes in New York gave her the inspiration for a combination class that would work the entire body.

When she tested the WaterRowers at a recent fitness expo she knew she had found the right machines.

Like indoor cycling, rowing is also very much a leg workout, with 60 per cent of the effort being in one’s legs. 20% is core and 20% is arms and back. Performed correctly, one’s legs work just as hard as on a spin bike, but the rest of the body is working equally as hard at the same time, making the rower the ultimate cardio and strength machine. Meyerowitz ran a trial of these classes with regular clients clients to develop the format.

She says: “The response to the classes was unanimous. They all loved the rowers and many were shocked by the high intensity.”

The classes, which are a first in Melbourne, start with 25 intense minutes on the spin bike followed by 25 minutes of intervals between the WaterRower and core and chest work on mats.

It makes makes for 50 minutes of workout that feels like it passes in 20 minutes. It’s a low impact full body strength workout that is fun and gets the heart pumping like crazy. Like Crossfit, but without the injuries.

Meyerowitz says that she is really excited to offer this completely unique class format. It has taken SpinStar to the next level.

“People are busy and although fitness is important to them, their lives do not revolve around it. They want to be able to achieve as much as possible, as safely as possible in as short a time as possible. They can now do this at SpinStar.”