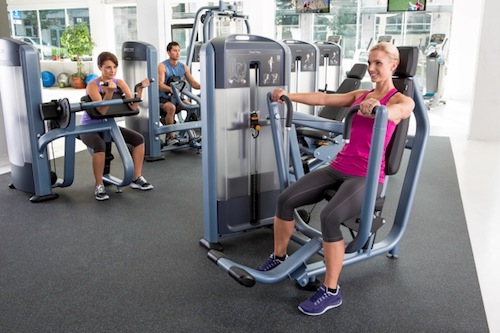 CrossFit seems to be everywhere. It’s all over the fitness headlines, at least. A Google keyword search generates 3,800 news items that mention the relatively new discipline that emphasizes functional training methods and Olympic lifts in a timed, often competitive, no-frills environment. You’d think the powder-coated steel of selectorised equipment had all but turned to rust in CrossFit’s sizeable, sweaty presence.

“What we hear and read would make it seem like everyone is only interested in doing what we have categorized as functional movement activities. It is all the buzz,” says Pete Borchert, director of strength product development at Woodinville, Wash.-based Precor, manufacturers of selectorised machines and other gym equipment. “Our research suggests that is not what is really happening in health clubs.”

STRONG SHOWING
Earlier this year, Precor completed a survey of 1,000 individuals in the United States with an active gym membership of three months or more to identify the hot trends in fitness.

Translated to what Borchert refers to as “stickiness,” that means 79 per cent of selectorised users reported still using the equipment at the time of the survey. “This makes sense,” Borchert says. “The vast majority of members are what we term ‘balancers’ or ‘strugglers.’ These are members who may not be ready or motivated to perform compound, multi-joint movements that require a pretty high degree of joint integrity, strength, balance and agility.”

Just how many US gym members use selectorised equipment? According to the Sports & Fitness Industry Association’s 2013 Sports, Fitness and Leisure Activities Topline Participation Report, the number has topped 39 million on average over the past six years among individuals ages six and older, with virtually no change (-0.1 per cent) in usage during that span.

DESIGN PUSH
AB contributors Barry Klein and Rob Bishop — who co-own two Scotrun, Pa., health club locations (more than 2,000 members combined), as well as a financial stake in a CrossFit facility three miles away (70 members) — agree based on their own anecdotal evidence that reports of selectorised equipment’s demise have been greatly exaggerated. “All of the coverage that CrossFit has been getting has made selectorized machines seem passé,” Klein says. “As for us, we just brought in an entire new line of selectorised, and we’re glad we did. Despite all of the hoopla around CrossFit, our selectorised equipment is as popular as ever.”

Bishop points out that bootcamp-style classes still draw a relatively small percentage of exercisers, and even those individuals enjoy working out in additional ways. “Selectorised equipment isn’t going anywhere, and the vast majority of exercisers still use it for basic strength training,” he says. “Some exercises — hamstring curls, for instance — are simply better done on a machine. The new machines are fantastic and feature some great design elements. We have gotten more compliments on the line we just brought in than anything else we’ve done in years.”

There are boutique gyms without any selectorised equipment, admits Klein, adding that large gyms are finding they don’t need to offer multiple selectorised lines, and would rather free up floor space for trendier workouts. “For facilities such as ours, selectorised machines are a staple,” he says. “I can’t imagine not having them.”

While selectorised equipment remains on solid ground among today’s gym-goers, manufacturers are still challenged to keep it relevant well into the future. “Relative to most cardiovascular equipment, strength equipment — particularly selectorised equipment, which is very movement specific — can be perceived as more intimidating to the untrained user,” Borchert says. “Most exercisers look at a treadmill and know what to do on it. They see a bike as something they have been doing since they were a kid. However, strength machines look different — not as intuitive or familiar. We have a responsibility as designers and manufacturers of equipment to help users who may not be as familiar overcome these hesitations, so they can experience the benefits these machines are proven to provide.”

This article appeared in Athletic Business. To find out more about Precor click here.