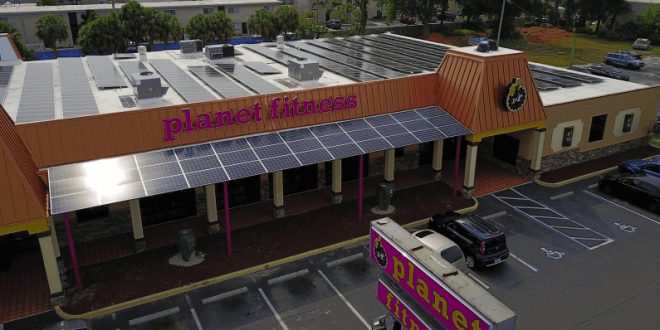 Planet Fitness Is Saving The Planet

As a result, it is now 99.5 percent reliant on sustainable solar power.

This capability was made possible from a redesign of the building, that involved the placement of 179 kilowatts of solar panels — a solar power canopy and solar roof system is now fully integrated into the 20,000-square-foot building’s infrastructure. As part of the project, the building’s lighting was also upgraded to LED fixtures.

With these additions, Planet Fitness estimates more than 5,600 tons of carbon dioxide will be eliminated — the equivalent to the planting of more than 130,000 trees — and the building’s monthly energy bill will be reduced by 99 percent.

“We are extremely excited to celebrate our first solar-powered Planet Fitness location system-wide,” said Chris Rondeau, Planet Fitness’ CEO, in a press release. “We are proud to support Doug’s work on this important initiative and always work closely with our franchise partners to support their enterprises, encourage innovation and reduce our environmental impact wherever possible.”

Florida has a total of 239 per year with sun and here in Australia, the average across the whole country is 235 days with sun*. Come on Australia, we pay way too much to the power companies – imagine a 99% reduction in your gym energy bills!

There’s even more you can do to reduce the carbon footprint and energy bills in your gym – read our Offset Your Gym Energy Bills NOW! article.

About Planet Fitness
Planet Fitness was founded in Dover, New Hampshire, USA in 1992, has more than 1,300 locations in 48 US states, the District of Columbia, Puerto Rico, Canada and the Dominican Republic. Planet Fitness serves around ‘10 million‘ members.