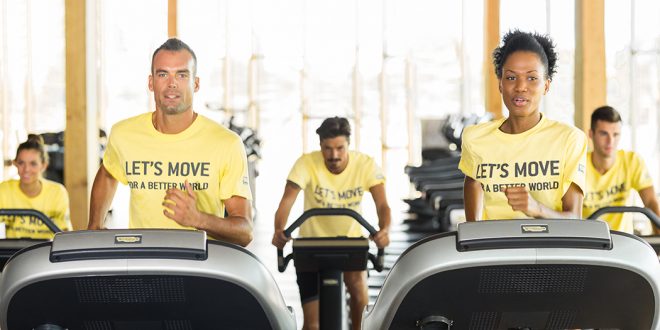 Looking for one more good reason to get up and go to the gym?

Allianz Stadium Club and Melbourne Sports & Aquatic Centre have partnered with Technogym, the world’s leading wellness and fitness company, for ‘Let’s Move for a Better World’, the social campaign which enables participants to get fit while making a difference for others.

To take part in ‘Let’s Move for a Better World’, the public can join any participating gym and collect as many ‘MOVEs’ (Technogym’s unit of measure for movement) as they can. Just download the Technogym App and use the Gym Finder to locate participating gyms and start moving. Participants will be able to train for free in all gyms taking part in the campaign.

Thanks to the Technogym Ecosystem – the first open platform in the industry which includes equipment, services, content and programs – and mywellness cloud, Technogym’s cloud computing platform, participants will be able to collect MOVEs and create a challenge amongst friends at a participating clubs, gathering training data and creating a performance ranking to share with the community or on social media.

As the world’s leading wellness and fitness company, Technogym’s defining mission is to help people around the world be more active, healthier, and happier. To achieve this, Technogym launched the global ‘Let’s Move for a Better World’ campaign four years ago to help tackle the global issue of obesity and a sedentary lifestyle, one of the most serious epidemics of the 21st century.

Last year, 513 clubs across 21 countries took part in the challenge and approximately 122,000 participants tracked their workouts on Technogym equipment, resulting in 400 million MOVEs (Technogym’s unit of measurement for movement) and 170 million calories burned. In Australia, Melbourne’s WaterMarc Banyule took out the top spot, with the club’s members collecting more than 1.7 million MOVES.

It’s simple; just head to your local Technogym-equipped gym, build up your MOVEs and help transform your area into an all-round healthier and more active community. Join in and Let’s Move for a Better World.

About Technogym
Founded in 1983, Technogym is a world leading international supplier of technology and design driven products and services in the Wellness and Fitness industry. Technogym provides a complete range of cardio, strength and functional equipment alongside a digital cloud based platform allowing consumers to connect with their personal wellness experience anywhere, both on the equipment and via mobile when outdoors. With over 2,000 employees and 14 branches in Europe, USA, Asia, Middle East, Australia and South America, Technogym exports 90% of its production to over 100 countries. More than 65,000 Wellness centres and 200,000 private homes in the world are equipped with Technogym. Technogym was the official supplier for the last six editions of the Olympic Games: Sydney 2000, Athens 2004, Turin 2006, Beijing 2008, London 2012 and Rio 2016.