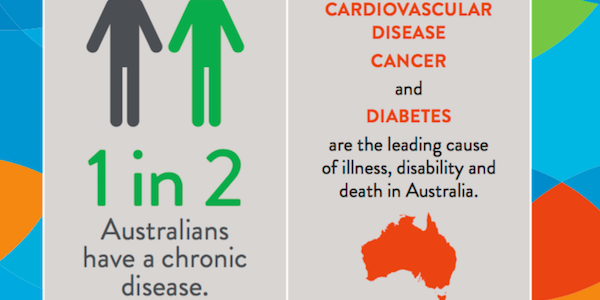 Australia’s Health Tracker released by the Australian Health Policy Collaboration (AHPC), shows one in two Australians have a chronic disease yet the Government only invests 1.5% into prevention for chronic diseases says Public Health Association of Australia (PHAA) CEO Michael Moore.

This new tool from AHPC at Victoria University, shows almost one third of chronic disease could be prevented by removing risk factors such as smoking, alcohol use, physical inactivity and high body mass.

“The results are particularly shocking with almost 30% of Australians either obese or overweight and 91.5% of Australians are not doing enough physical activity. Now more than ever the elected Government needs to implement measures to stop the rise in chronic disease in its tracks,” said Mr Moore also President of the World Federation of Public Health Associations (WFPHA). “The new research shows the statistics today and gives a target statistic to meet in 2025. These statistics are achievable if the Government listens to what over 50 health organisations are saying and invests in prevention. Chronic diseases are on the rise putting enormous pressure on the health system and costing the tax payer more and more to support those in hospital.”

Today, more than 80 organisations including PHAA CEO Mr Moore will be attending a national forum in Melbourne to discuss ways to combat the rise of chronic disease to achieve a healthy population.

“A lot of promises were made before the election to fight chronic disease. What we need to see is action from the elected Government as this issue is affecting half of the population. This isn’t about who is right, it’s about doing the right thing for the country and improving the overall health of the Australian people,” concluded Mr Moore.

“This research is the first of its kind and should be taken as not only a warning but as a call to action to the Government. PHAA has outlined what can be done: a sugar tax on soft drinks, ban on alcohol advertising and continued investment for the health star rating. Let’s keep our current and future generations healthy by investing in prevention as well as cure,” says Mr Moore.