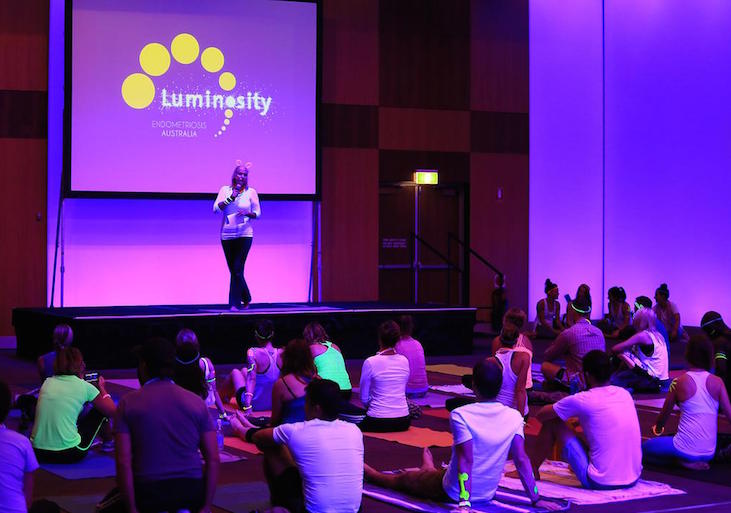 Following the success of last year’s charity event, Luminosity is back in 2015 on Saturday March 21 and is set to be even bigger and brighter!

Hosted by Endometriosis Australia, The Mobile Yogi and Alana HealthCare, Luminosity’s aim is to raise funds for research and most importantly increase awareness of endometriosis – a condition affecting 1 in 10 women in the prime of their lives – in a bright, fun way.

Endometriosis is a common disease in which the tissue that normally lines the uterus grows outside the womb in other parts of the body.  It often starts in teenage years.  Symptoms vary between women which contributes to the current 7 to 10 year delay in diagnosis.  Common symptoms include pelvic pain that puts life on hold around or during your period.  It can damage your fertility.  It most often affects reproductive organs.  It can also affect your bowel, bladder and other organs near your pelvic cavity.

“We want everyone to shine!” says Simone Skinner-Smith ambassador of Endometriosis Australia and Director of The Mobile Yogi, a Sydney-based yoga school.  “The idea is to have a great time, practicing yoga whilst raising funds for such a good cause – it’s the perfect feel-good Saturday night out!”

Inspiration for the event stemmed from the free, monthly yoga classes Skinner-Smith was running for women suffering with Endometriosis, such as herself.  “I really found yoga offered me physical and mental relief from what can be a very frustrating condition.  It is so great to be turning a negative issue into such a positive, vibrant event!”

Luminosity is being held in March to coincide with International Endometriosis Month, and for the first time, will also be held in Melbourne.

“Last year we had over 150 women, men and children glowing and flowing at Luminosity Sydney and we are thrilled to see the event growing and expanding to Melbourne in our second year so that we can reach even more people,” says Donna Ciccia, Director of Endometriosis Australia.

“And this year, the Sydney’s lineup includes even more fabulous instructors and performers who have all graciously given us their time to support the event.”

The event also has the support of industry professionals, such as Associate Professor, Dr Jason Abbott of Alana Healthcare who is widely regarded as one of the country’s top specialist of endometriosis.

“Having cared for women with endometriosis for twenty years, I have come to recognise that there is no panacea for this condition and a holistic approach to care is vitally important.  Alana Healthcare for Women is proud to sponsor this event that promotes your health, wellbeing and make sure you are cared for mind, body and spirit.  For together we can end endo.”

Tickets are now available for this great charity event and participants are encouraged to wear flouro colours so they will shine under the UV lights, with glowing accessories and a glowing body paint station available on the evening. Plus there will be a number of wholesome snacks and drinks on offer.

Luminosity is open to yogis, families and anyone looking to have fun and shine bright while supporting this great cause.

For more information click here or watch the video below: