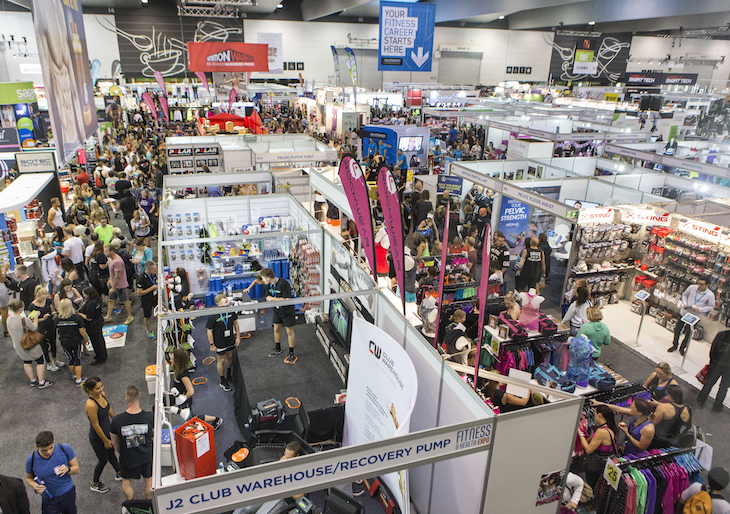 What do you get when you bring the top fitness brands, celebrities and live sporting events together under one roof at the Melbourne Convention and Exhibition Centre for three days? You get tens of thousands of visitors and the biggest fitness event in the southern hemisphere.

In Melbourne for the second time in its 21-year history, the Fitness and Health Expo, the industry’s number one event, has raised Melbournian heart rates with more than 19,800 square metres of the latest gym equipment, exercises classes, fitness clothing and accessories, VIP fitness celebrity workouts and the thrill of live sporting events.

Officially launching with Australia’s Strongest Man Derek Boyer pulling a 33-tonne Airservices fire truck along the edge of the Yarra River, the Expo rolled into town on Friday April 10.

Over the three days visitors passed through the doors of the Melbourne Convention & Exhibition Centre to visit more that 200 exhibitors.

The Strength and Conditioning Zone, now into its fourth year, showcased four feature areas – Natural Bodybuilding, CrossFit, Martial Arts and Powerlifting – and proved to be one of the biggest attractions at the Expo this year with thousands of athletes competing live for state, national and international titles.

Word Records were broken as part of Powerlifitng Australia’s Pacific Invitational event, which showcased the strongest men and women in the world as they tackled all-time records.

Among some of the record highlights was Jezza Uepa, from Nauru, setting a new World Record in the open division with a squat of 415kg and New Zealander Brett Gibbs bettering his previous Squat World Record with a new one at 280.5kg in the 83kg class.

A popular new addition to the Expo this year was the Rob Forte Reebok Invitational, a battle between some of Australia’s best CrossFit athletes who competed in state-based teams. The winning team was NSW consisting of Khan Porter, Chad Mackay, Lindsay Vaughan and Vicki Webber.

Some of the latest product releases launched at the expo included a new indoor surfing class (SurfSet), healthy vending machines (Lean Machine), gym equipment that remembers who you are (Milon) and workouts set within a video game (Versus).

Event Director of the Fitness and Health Expo Shaun Krenz said they were yet again overwhelmed by the response from the Melbourne market.

“This fitness market in this country just keeps going from strength to strength. The industry is constantly innovating and the market responds well as people are always looking for an edge for their fitness or a way to motivate themselves with something new.”

Upcoming dates for the Fitness & Health Expo in other states: