Latest News
Home / In the news! / Jane Fonda reveals her philosophy on health and fitness 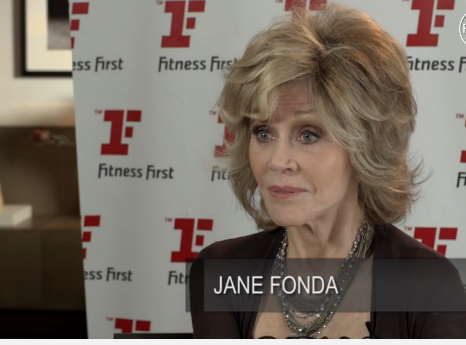 Jane Fonda reveals her philosophy on health and fitness

For Jane Fonda, fitness is not just physical.

The 76-year-old actor and activist says it has helped her stay centred and emotionally strong through a life that has seen her weather the suicide of her mother when she was twelve, a father who was frosty at best, bulimia, three divorces, breast cancer and osteoarthritis. To name a few.

In Australia for this week’s relaunch of gym giant Fitness First, the two-time Oscar winning actor herself built an exercise empire more than 30 years ago.

Today, she says of the period, “If you’re in the middle of a nervous breakdown, working out really hard is not a bad thing because it does keep you from going over the edge – it gets the endorphins going. And it was kind of like ‘I’m sore, so I must exist’.

Just last year, Fonda released the latest of her 23 workout videos, which have sold more than 17 million copies since 1982.

“I believe in fitness,” she says. “Whether you’re young, whether you’re old, whether you’ve ever been exercising or just starting. It’s important. Maybe the most important thing in having a successful, long life.”

It has been of profound importance for Fonda, who comes from a “long line of depressives” and recently said that she once “thought I was going to die of loneliness, I was so unhappy”.

On the night of her 51st birthday, her second husband, politician Tom Hayden revealed he was in love with another woman. It was the final straw in a fraught relationship that spanned nearly two decades.

In anguish, Fonda sat on her exercise bike and cycled furiously for five hours.

“The physical pain is nothing compared to what I am feeling emotionally. I’m breaking apart,” she told Newsweek at the time.

“I know, in the deepest part of myself, the importance of remaining physically active, even if you’re going through a nervous breakdown, even if you’re older or have body parts that are falling off… it makes all the difference in the world.”

Not surprisingly, Fonda hasn’t let hip and knee replacements get in the way of her exercise routine.

“I’m glad I live at a time when you can replace fenders and hubcaps… instead of saying ‘well, I have these problems so I’m going to stop’, what’s happened is I’ve adjusted how I work out to my physical limitations.”

There seems little that would stop Fonda. She works with various charities, is set to release a book for adolescents on bullying and body image, is writing a fiction book and is working on numerous on-screen projects.

Although she lives life at full throttle, she believes fitness fanaticism has helped her find harmony in life.

“The fact that I have always remained physically active has had a great deal to do with [staying sane and humble]. It has kept me centred and balanced emotionally.”

But, it’s not all just about the workout.

“I also meditate,” the mother of three says. “And I also have a very strong social network… I mean a group of women together, the way we laugh when we can laugh, there ain’t nothing like that… we go deep don’t we and we guffaw. Maintaining physical fitness and social networks is so critical to successful ageing.”

Interview and article by Sarah Berry for SMH.