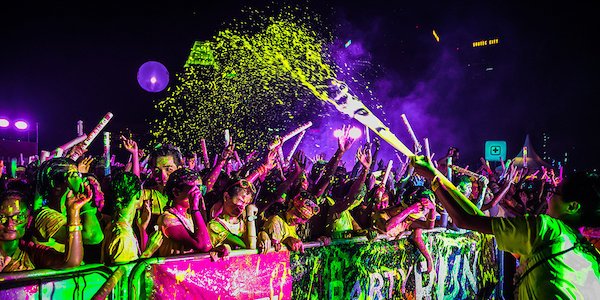 Prepare to light up the night with ILLUMI RUN!

The event was first established in Singapore in 2013 and is now expanding in Australia. Following its successful debut events in Brisbane and the GoldCoast earlier this year, the ILLUMI RUN will brighten upother states around Australia in 2016.

The event will launch in Melbourne on 27thFebruary 2016 at Yarra Park, home to the iconic MCG, return to Brisbane on 9th April 2016 at Brisbane Showgrounds, Bowen Hills and launch in Sydney on 23rd April 2016 at Canterbury Park.

ILLUMI RUN is a 5km ‘party on the run’ designed to be entertaining every step of the way. During the run,participants will be splattered with neon paint as they make their way through the course.

The course includes five glowing dance zones with electrifying live music, themed entertainment zones, glow water and neon paint. There will also be a Neon After Party with DJ’s and dancers performing on stage and the crowd will continue to get illuminated from paint cannons. The paint cannons will be synchronised with the DJ sets and shoot over 50 litres of illuminated paint at a time.

The event is open to runners aged 10 and up (children require parental supervision).