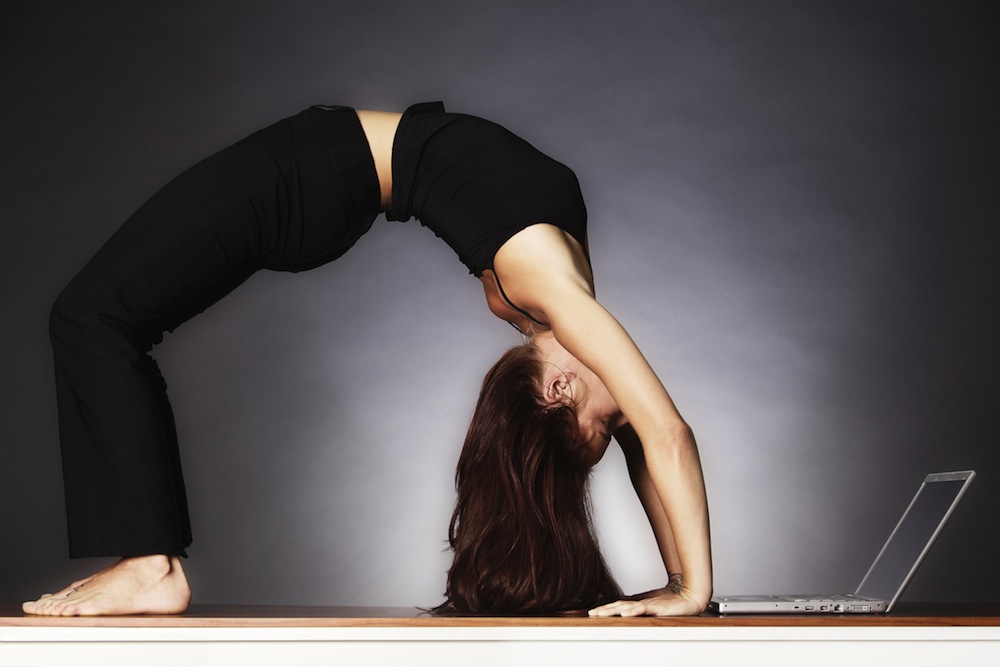 Is encouraging staff to wear gym clothes to work a good idea?

“The basic premise is that people in fitness gear are more likely to exercise.”

And then there’s Dress Pant Yoga Pants. The $88 trousers with belt loops, faux pockets and sun-salutation-ready stretch are the creation of Betabrand, a company that also produces the similar Dress Pant Trackpants for men. Although they might sound like novelty items, clothes that can go straight from your workout to your work (or vice versa) are going to come in handy in 2014.

That’s because this isn’t just a column. It’s a pitch for offices around the world to embrace my big idea: “Workout Wear Friday.” The basic premise is that people in fitness gear are more likely to exercise — or at least to think about it. So let’s get everyone in comfortable, moisture-wicking outfits once a week to demonstrate our commitment to physical activity.

“This has legs,” says Rick Miller, who has experience changing the fabric of American society. Back in the early ’90s, when he was doing public relations work for Levi’s, he and his team championed a wacky idea called Casual Friday. They distributed a guide that suggested polished looks with khakis and jeans, and a new sort of office style was born.

One secret to their success? Loosening up the dress code was a no-cost benefit to offer employees.

The timing is even better now, Miller adds. Companies are once again pinching pennies, and they’re more concerned than ever about rising health-care costs. Plus, social media could help spread the trend faster than you can say “selfie.”

Bruce Elliott, manager of compensation and benefits at the Society for Human Resource Management, agrees that appealing to the bottom line is the way to sell companies on the concept.

“Exercise means a more fit workforce that will access the medical plan less often,” says Elliott, noting that research has shown that for every dollar spent on wellness, businesses can save several times that amount in health-care costs and productivity.

But to see a return on investment, Elliott says, businesses need to create a culture of wellness, and clothes alone can’t do that. “You don’t want to just say, ‘It’s Friday! You can wear sweats to work.’ It’ll get old quickly,” he adds.

To make the idea stick, he’d also throw in a planned physical activity for offices to do together as a team — maybe a morning group walk on the shops. Then participants could be allowed to wear those clothes the rest of the day as an incentive.

People in workout gear probably won’t limit their activity to just the one walk, says John Porcari, program director of the clinical exercise physiology program at the University of Wisconsin at La Crosse.

Back in 2004, Porcari helped lead a study on the benefits of wearing casual clothes to work. A group of 53 subjects wore pedometers both on typical days in the office and on days when they wore jeans. On average, participants took an extra 491 steps — an 8 percent increase — on the casual days.

“Typically, when they wear jeans, they also wear more comfortable shoes,” says Porcari, who believes that societal standards of dress are hampering physical activity. “People tend to be sedentary. If we force them into high heels and ties, we are reinforcing that.”

The findings got attention at the time, but Porcari isn’t aware of any follow-up research. If he were to investigate the Workout Wear Friday principle, he knows just how he’d go about it. Instead of pedometers, he says, subjects could have accelerometers that capture more data. He’d also combine the numbers with a questionnaire to ask directly about the effects of clothing on mind-set and behavior.

In his own life, Porcari clearly sees the influence: “If I’m teaching a class across campus and I have a jacket and tie on, I’ll take my car. If I don’t, I’ll walk.” And if he can get away with wearing exercise attire all day, he does.

Among certain populations — exercise science researchers, personal trainers, fitness writers — there’s nothing eyebrow-raising about stretchy fabrics in the workplace. But in most offices, gym clothes are expressly verboten, says Lauren A. Rothman, a fashion consultant and author of the new book “Style Bible: What to Wear at Work.”

But on the off chance that Workout Wear Friday gets the go-ahead, she’d want to establish some ground rules. For starters, nothing ripped, faded or stained. If you’re wearing pants that are tight around the crotch or backside, you’ll also need a looser-fitted cover-up, such as a jacket or sweater, she says. And please don’t show too much skin.

Any exercise attire for the office has to be an upgrade from what you’d throw on to go to cycling class. “Match your shoes to the outfit. It should almost be equivalent to a suit. Don’t just hodgepodge it,” Rothman decrees. Even tiny details matter. (“An ankle sock is best — there’s no need for excess sock,” she opines.)

One factor in my favor, Rothman says, is that activewear has gotten a major upgrade in recent years. Brands are focused not just on the technical aspects of their products, but also the fit and the styling. So even though there aren’t many places out there selling Dress Pant Yoga Pants, it’s not such a stretch to find articles of clothing that serve the same dual purpose.

Rachael Siefert, 28, works at a communications firm. She’s also an instructor at the Bar Method, a fitness studio. And she’s gradually figured out how to blend her two wardrobes. It started when she tried pairing her black workout pants with a skirt and boots one day in the office. “Every woman hates wearing tights, so I went for it,” Siefert says. “Nobody noticed.”

The switch has made her more comfortable — and productive — when she’s at work. It’s also made her more likely to pop over to the studio to take a lunchtime class. “I only have that hour. Work will notice if I’m gone for longer than that,” says Siefert, who saves time by only changing her top. “It’s one less step stopping you from working out.”

Increasingly, she’s found out that other women are using the same technique, or sneaking a workout top under a sweater. So maybe Workout Wear Friday is already happening in secret.

To really launch this movement, however, I need to find a company that will publicly get on board. For Casual Friday, Miller says, the tipping point was Alcoa, the strait-laced corporation in Pittsburgh. “Then 90 of the Fortune 100 companies requested information,” Miller says.

Someone in Human Resources told me some larger companies might have potential liability issues. So I’m thinking I could do better with 1776, a business incubator space across the street from our offices.

There’s no official dress code, and casual clothes are already common, says community manager Kate Nolan. And because of the start-up culture, “it’s always acceptable to wear a T-shirt with a logo on it,” she adds.

So would they try Workout Wear Friday? “I feel like we could. We’ve talked about a pyjama day,” Nolan says.

Let’s save that idea for 2015, when we’ll consider whether Sleepwear Mondays could help improve shut-eye quality.

By Vicky Hallett. This article appeared online at Daily Life.