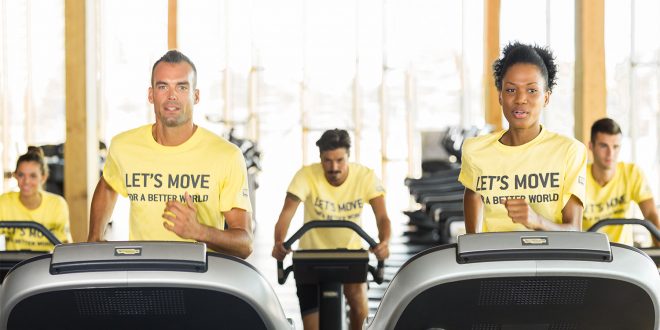 Cesena– April, 2017 – Technogym, the world’s leading wellness and fitness company, today announced the amazing results of its ‘Let’s Move for a Better World’ campaign – a worldwide social campaign to raise awareness in the fight against obesity and sedentariness, that ran its fourth edition from March 13-31, 2017.

‘Let’s Move for a Better World’ is the biggest social campaign in the industry and embodies Technogym’s mission to improve wellness on a global scale.

Thanks to Technogym’s ecosystem platform, mywellness, gym members in fitness facilities around the world joined forces to donate their movement and promote wellness and healthy lifestyles in their local community and beyond. The more active the users were, the bigger the donation to the communities.

The Technogym Ecosystem, is a unique solution that includes connected equipment and mywellness cloud – the first open platform in the industry, connecting people and fitness facilities all over the world.

Users can enjoy a fully personalised wellness experience, and facilities can create challenges amongst their members or with other clubs.

The new 2017 edition of the campaign has allowed an increased number of operators to win and donate a piece of Technogym equipment to a not for profit organisation of their choice, thanks to the new awarding system which enables every facility to win by reaching predefined targets of movement performed.

Some key stats from the 2017 edition:

A representative for each of participating facility get the chance to take part to the ‘The Let’s Move for a Better World Conference’ at the Technogym Village, in Cesena (Italy) from May 21st to 23rd.

The conference allows participants to share knowledge on how physical activity can provide a vital contribution to building a more sustainable society based on personal health, and to celebrate the campaign winners during the official award ceremony.

You can find out more information at www.technogym.com/letsmove

About Technogym
Founded in 1983, Technogym is a world leading international supplier of technology and design driven products and services in the Wellness and Fitness industry. Technogym provides a complete range of cardio, strength and functional equipment alongside a digital cloud based platform allowing consumers to connect with their personal wellness experience anywhere, both on the equipment and via mobile when outdoors. With over 2,000 employees and 14 branches globally, Technogym is present in over 100 countries. More than 65,000 Wellness centres and 200,000 private homes in the world are equipped with Technogym. Technogym was the official supplier for the last six editions of the Olympic Games: Sydney 2000, Athens 2004, Turin 2006, Beijing 2008, London 2012 and Rio 2016.