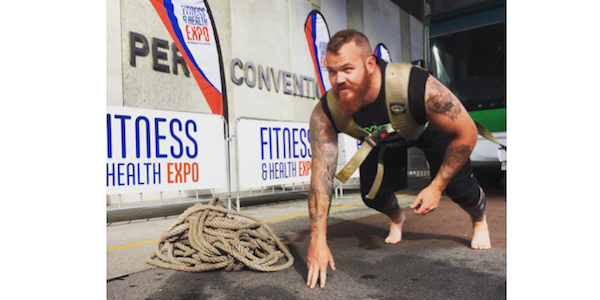 Bringing the top fitness brands, personalities and sporting events to Perth for the third year, the Fitness & Health Expo has been welcomed back with a 11 per cent increase in visitor numbers.

Officially launching with local strongman Scott Lockyer successfully pulling two buses outside the Perth Convention & Exhibition Centre on Friday 11 September, the Expo was off to a strong start.

Over the three days, including a late night opening on the Friday, almost 8,800 visitors passed through the doors of the Perth Convention & Exhibition Centre.

As part of the powerlifting invitational event, a number of World Records were broken. These include:

If you missed getting along to the Expo this year, then you missed out on seeing some of the latest product releases in the Australian fitness industry. From commercial gym equipment to new styles of group exercise classes and the latest accessories, there were some fantastic product launches at this year’s Expo. Highlights included the locally created Torsion Bars, a fitness tool inspired by Australian Army field exercises and the new MyRunning Logbook app from Technogym, which allows you to retrace your favourite outdoor run on the gym treadmill.

Director of the Fitness & Health Expo Shaun Krenz said they were excited to be making a solid footprint and valuable connections in the Perth market.

“This truly is the number one event in Western Australia for those who love fitness and we were really excited to bring it to Perth for the third time with an even bigger and better offering.”