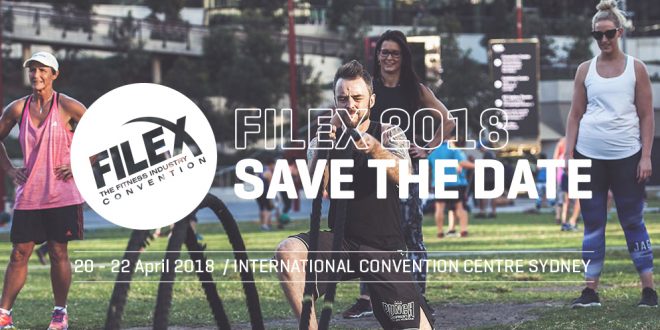 Article written and supplied by Bill Moore for the What’s New in Fitness Magazine – Summer 2017 Edition.

FILEX, a three-day educational conference where 2,500+ people who work in the fitness industry come together to learn new techniques, tips and ideas to help them enhance their career success. For almost three decades FILEX was owned and delivered by Australian Fitness Network.

The recent announcement by Fitness Australia CEO Bill Moore, of a joint led venture to acquire FILEX marked an historic moment for the Australian Fitness Industry. In this article, Bill talks openly to WNiF publisher Craig Mac about the how the opportunity to take control of one of the world’s premier fitness events came about and the exciting times that lie ahead for the Australian fitness community and it’s members.

It was at FILEX 2015 that I first spoke to Fitness Network Executive Director, Nigel Champion, about FILEX. It was a chilly April morning at the Melbourne Convention Centre and I had been in the CEO role at Fitness Australia for two weeks or so.

Nigel and I were ambling past exercise professionals (not trainers or instructors – professionals – this a serious business we’re in) who were scurrying between sessions inhaling a chicken wrap as they laughed and chatted amongst themselves. It was the April lycra-fest that is the annual FILEX education convention.

“So“, I queried to Mr. Champion, fitness visionary and entrepreneur, “how is it that Fitness Australia is one of the few national peak bodies that doesn’t own its own education convention?”

“Because we own it.”

What I like about Nigel is his forthrightness and economy of language. What I don’t like is his straight shooting South African honesty.

Not the response I was looking for, but it was OK because Fitness Australia, a not for profit by name as well as by nature, had no money to buy it anyway. But I thought I’d ask the question.

Fast forward to March 2017 and I’m sharing a coffee with Ryan Hogan, the CEO of Network who drops the throwaway line “oh, if you’re still interested in acquiring FILEX you’d better hurry up because now is the time. Nigel and Greg have an offer on the table.” Cue theme to Mission Impossible immediately installing itself in my head,where it would stay for the next 272 days.

A simple proposition really. Acquire the biggest fitness education of its kind in the southern hemisphere with no money, no assets to borrow against, and no time to pull it all together.

I was repeatedly reminded by financiers over the next few days of the traditional finance protocols that underpin the modern global economy of having significant assets and a slab of cash, of which we had neither, to undertake an acquisition such as FILEX as I ingratiated myself pleading for capital. All without a glimmer of hope. Clearly if we were going to acquire this puppy we needed a change of strategy.

So maybe if Fitness Australia can’t afford all of it, maybe it could afford some of it. The Board were keen – cautious, but keen. It was a minefield of potential conflicts of interest and exposure to debt. But we had some things on our side – some potential investors who were true believers in the fitness industry and the convention itself.

A masterful governance expert on the Board who could steer us through the conflict minefield and keep ASIC happy. And importantly, a vendor who believed that Fitness Australia should be the logical and rightful owner of FILEX.

Strategically it was the perfect fit for Fitness Australia – our core pillars of proactive leadership, meaningful engagement and service excellence would all get a resounding tick if we were successful. Plus it put a stake in the ground to underscore everything that Fitness Australia, and indeed the fitness industry at large, holds dear – continuing quality education and raising the standard of our industry. No other event could eclipse this triumvirate of features that makes our Australian fitness professionals world class.

The joint venture, led by Fitness Australia, attracted some of the most talented fitness industry luminaries (Anglo Saxon modesty requires me to exclude myself from that description) who clearly demonstrated their commitment to the industry by stumping up their own cash to ultimately acquire the convention.

In the fullness of time, as shares are divested, the intention is that FILEX will be wholly owned by the peak national body, Fitness Australia.

What makes FILEX the greatest fitness event of the year? First up, community. It’s the annual fitness community get together to exchange views, ideas and wisdom. And to drink and laugh in true fitness industry style. Of course you will meet new people – always. Every time
you go to FILEX you will make a new friend, guaranteed.

Next is the education – new ideas and learnings from world class speakers in a world class venue that keeps our industry professionals at the top of their game, raising the standards of knowledge and delivery that ultimately improves the outcomes for the Australian public.

Most importantly for me though, it tells the community, the government and the business world that the fitness industry is robust and creative, that it is a serious and valid contributor to the health of Australians, that it is a mature industry worthy of investment, and that it is committed to growth and improvement of quality fitness services.

Article written and supplied by Bill Moore for the What’s New in Fitness Magazine – Summer 2017 Edition.