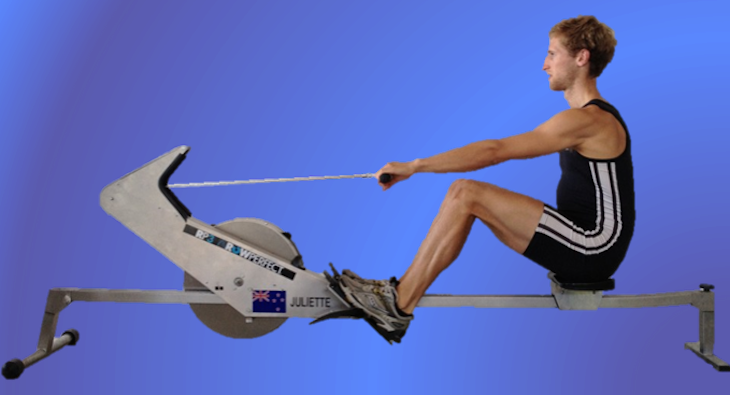 Greg McClure is a great bloke. 22 years ago he was riding his motorbike and went past a truck coming the other way – but didn’t see the trailer behind it until too late. His spine was severed about half way down the ribcage (at T6 for the medically minded). As he says, some people donate their body to science after they die; he’s donated his for use before he dies! Greg recently travelled to Malaysia to receive an award as the International FES Society’s Research Participant Volunteer for his efforts as a human guinea pig over the past decade or so.

A few weeks ago I went out to Sydney University to see Greg using the prototype of the Indoor Sculler which we donated in 2005 as part of a research project with USyd. A former weekend vet nurse of mine and Queenwood rower named Laura Middleton was studying Biomedical Engineering at the time. For her honours thesis under Professor Richard Smith of the USyd Faculty of Health Sciences Laura designed, pretty much from the ground up, an functional electronic stimulation (FES) system designed to enable paraplegics to row using the Rowperfect. The fact they could stabilise the rower using a stable seat and move the mainframe to-and-from the rower obviously made it a whole lot easier than using a fixed flywheel machine and having the rower bounce back-and-forth – as we all do when using a fixed flywheel machine.

Laura has since done medicine and is about to do her final exams as a radiologist, and due to the demise of the manufacturer of the old system and funding restrictions the project stalled until the past year when Nalan Ektas (sitting behind the computer when the camera pans to the left) again supervised by Professor Richard Smith, reactivated this wonderful project with some improved technology. You can see there’s still a whole lot of wiring and conversion boxes, but it’s pretty clear Greg’s rowing – interestingly a little differently to how we would, but it suits him and remember he can’t use all the muscles in his trunk – only his quads, gluts and hamstrings are working due to the FES system. He activates his quads/gluts to drive and then the hamstrings to return the mainframe, using buttons under each thumb on the handle. He really loves it – apparently the interactivity makes it a whole lot more interesting than the FES bike, where he simply sits, pushes a button, and the legs just start up and keep going. The muscle development compared to what he would have without the FES is really clear (I actually thought Greg was only partially paraplegic at first because he has muscles on his legs).

There’s a fair way to go until it’s really something someone could set up and get going by themselves from their wheelchair – but it’s a pretty good step. With a bit of development, one day it’ll probably run via a mobile phone, or at least as a small stand-alone widget in a box.

I hope you all enjoy it; personally I found it pretty inspiring; well done Greg, Nalan, Richard, Laura and everyone from the faculty who has contributed to this tremendously worthwhile project. It’s only when you see how much work goes into every little step of the way with projects of this kind, as I have been able to observe over the past ten years with this project, that you realise how hard the gains are – and how easily they can be lost.