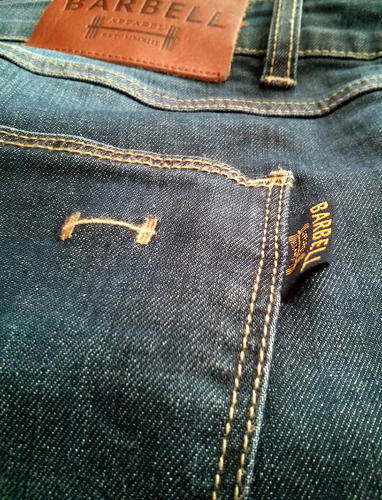 Fed up with jeans that don’t accommodate strong legs and a great booty, a group of athletes decided to make their own denim.

The same jeans that look divine when you’re posing in front of a dressing room mirror often turn into restrictive, unwearable leg-vices when you take them home and try to bend over or sit. Those with athletic bodies – sporting bulky calves, quads, and butts – have an especially hard time finding jeans that don’t cramp their active lifestyles.

That’s what inspired a team of weight lifters, snowboarders, and rock climbers in Nevada to create Barbell Denim – a new line of jeans designed for active people.

“We wanted jeans that were built for strong, powerful legs that would allow us to move completely freely and still look and feel like fashionable denim,” Hunter Molzen, co-owner of Barbell Apparrel, tells Co.Design. “Even for active people whose legs aren’t particularly muscular, we wanted to give them a denim option that allows them to have amazing flexibility and freedom of movement.”

After tossing around the idea in their local gym and among family and friends, they decided to do it.

Unlike jeggings (for the uninitiated, these are jeans fused with leggings) or other stretchy jeans, Molzen says Barbell Denim is still a “classic jean” at its core.

“For us, it was never enough to just take normal jeans, make them a bit more flexible, and say mission accomplished,” he says. “We knew there was something proportionally wrong at the heart of denim design.”

They began by taking the average measurements of their athletic friends and families and even from strangers who agreed to participate. After crunching the averages, they found that for these types of people, the ratio between waist, thigh, and butt measurements was much different from that found in the typical denim cut.

Then they went to the drawing board. They started with the basic measurements of a modern denim cut for men and women’s jeans, then gutted everything between the waist and knee – the area that largely dictates how comfortably you can move. Using those rough averages, they began several months of testing and designed fits that accommodated athletic body types but which were still form-fitting.

“When I wear Barbell Denim, it almost feels like I’m wearing nothing,” Molzen says.

If you’re a gym rat or if you too have a great booty, perhaps you’ll feel the same.

The team has already raised $76,247 for Barbell Denim on Kickstarter – far above their $15,000 goal – with 38 days left in their campaign. Go here to order a pair of Barbell jeans.